Following the unveiling of the plaque to Herzen (see it on open plaques) in Judd Street last month, the Marchmont Association have just installed another round the corner in Wakefield Street, commemorating the Victorian cross-dressers Boulton and Park, a.k.a. Stella and Fanny (open plaques entry). 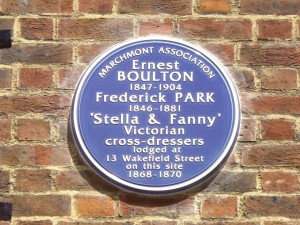 ‘Cross dressers’ is something of an under-statement. For not only did they drag up on stage but also in public; they were deeply involved in the homosexual subculture of Victorian London; and they were the defendants in a notorious trial that had the crowds  flocking to the courtroom.

Indicted for conspiracy to commit and incite to commit “felonious and unnatural crime”, and for public indecency, they were found not guilty. The police investigation came in for cutting criticism from the judge:

“The act of the police-surgeon in examining the person of the prisoner as he did, without any legal authority, was wholly unjustifiable. He had no more right to do it than he would have to inflict such an indignity on any person in custody, or any person he met in the street. The seizure of the letters of the other defendants also appears to have been without any legal warrant or authority.” Case Report

And the prosecution couldn’t even show it was a criminal offence for men to drag up in public.

In his brief overture to the unveiling Neil McKenna spoke of how the site itself had a larger part than just being the lodgings for Stella and Fanny. Now the headquarters of the United Reformed Church, 13 Wakefield Street had been a ‘house of accommodation’ for young men with a penchant for dressing up in women’s clothes. Consequently, there was quite a community based around it. Not a brothel as such, but not a legitimate lodging house either, it was run by Martha Stacey, probably a former prostitute, who knew what was going on and when to turn a blind eye to it. It was also the scene of the illegal police raid  so criticized by the judge.

So it’s not just these two men who are remembered by this plaque, but an SSSSI – a site of special sexual sub-cultural interest.

This entry was posted in history, london and tagged c19, history, lgbt, london. Bookmark the permalink.