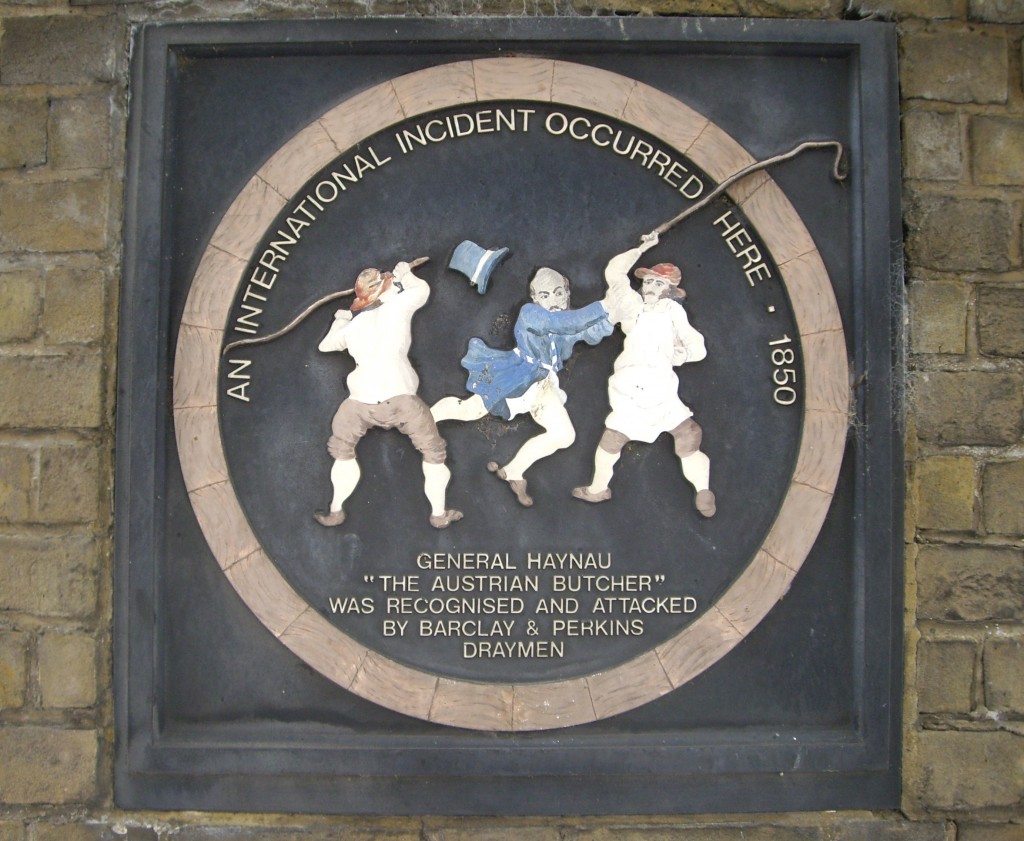 Plaque commemorating the attack on General Haynau by the draymen of Barclay and Perkins Brewery, Southwark, 1850

In preparation for leading a history walk round Southwark sometime later this year, centred on my work on debtors’ prisons and sanctuaries, I have been assembling material on other aspects of the Borough’s radical history. As well as walking these places, I’ll be blogging them too, starting with an international incident in a brewery.

Park Street in Southwark hosts one of London’s most unique plaques, and not just for being – unlike the standard plain blue – illustrated. It is one of the few plaques to commemorate a riot. The occasion was the visit of General Haynau, ‘The Austrian Butcher’, to Barclay and Perkins Brewery in 1850. Renowned for his brutality in repressing the risings in Italy and Hungary during the 1848 revolutions, and especially for whipping female prisoners, he was considered by many as the veritable embodiment of tyranny, which explains the glee in Reynold’s Newspaper’s account of the visit:

The Miscreant Haynau in London

Well and nobly have the high-spirited fellows employed at Barclay and Perkins’s brewery displayed their disgust and horror for a ruffian who has dared pollute our shores by his presence, and thrust his scoundrel person amongst us. The following description is given of his reception at the large brewery, where he was introduced as Rothschild’s friend:-
On Wednesday morning, shortly before twelve o’clock, three foreigners, one of whom was very old and wore long moustachios, presented themselves at the brewery of Messrs. Barclay and Company, for the purpose of inspecting the establishment. According to the regular practice of visitors, they were requested to sign their names in a book in the office, after which they crossed the yard with one of the clerks. On inspecting the visitors’ book the clerks discovered that one of the parties was no other than Marshal Haynau, the late commander of the Austrian forces during the attack upon the unfortunate Hungarians. It became known all over the brewery in less than two minutes, and before the general and his companions had crossed the yard, nearly all the labourers and draymen ran out with brooms and dirt, shouting out, “Down with the Austrian butcher!” and other epithets of rather an alarming nature to the marshal. A number of the men gathered round the marshal as he was viewing the large vat, and continued their hostile manifestations. The marshal being made acquainted by one of the persons who accompanied him, of the feeling prevailing against him, immediately prepared to retire. But this was not so easily done. The attack was commenced by dropping a truss of Straw upon his head as he passed through one of the lower rooms; after which grain and missiles of every kind that came to hand were freely bestowed upon him. The men next struck his hat over his eyes, and hustled him from all directions. His clothes were torn off his back. One of the men seized him by the beard, and tried to cut it off. The marshal’s companions were treated with equal violence, They, however, defended themselves manfully, and succeeded in reaching the outside of the building. Here there were assembled about 500 persons, consisting of the brewer’s men, coal-heavers, &c, the presence of the obnoxious visitor having become known in the vicinity. No sooner had the Marshal made his appearance outside the gates than he was surrounded, pelted, struck with every available missile, and even dragged along by his moustache, which afforded ample facilities to his assailants, from its excessive length, it reaching nearly down to his shoulders. Still battling with his assailants, he ran in a frantic manner along Bankside until he came to the George public-house, when, finding the doors open, he rushed in and proceeded up-stairs into one of the bed-rooms, to the utter astonishment of Mrs. Benfield, the landlady, who soon discovered his name and the reason of his entering the house. The furious mob rushed in after him, threatening to do for the “Austrian Butcher;” but, fortunately for him, the house is very old-fashioned, and contains a vast number of doors, which were all forced open, except the room in which the marshal was concealed. The mob had increased at that time to several hundreds, and from their excited state Mrs Benfield became alarmed about her own property as well as the marshal’s life. She accordingly despatched a messenger to the Southwark police-station for the assistance of the police, and in a short time Inspector Squires arrived at the George with a number of police, and with great difficulty dispersed the mob and got the marshal out of the house. A police galley was at the wharf at the time, into which he was taken, and rowed towards Somerset House, amidst the shouts and execrations of the mob. Messrs. Barclay have suspended all hands, in order to discover the principals in the attack. It appears that the two attendants of the marshal were an aide-de-camp and an interpreter. He had presented a letter of introduction from Baron Rothschild. who had therein described him as “his friend Marshal Haynau.”

Our own reporter, who visited Bankside on Thursday, ascertained that the general had a narrow escape from death, as his captors exhibited a strong inclination to extend towards him the same full measure of vengeance which he had so often exercised towards the unfortunate patriots of Hungary. In flying from his pursuers, he, as stated above, entered the George, where, after seeking vainly for some outlet by which to escape, he found his way into a small pantry, in which was a door. This door the general opened with the energy of desperation, and was half-way through it, when he found there was no hope of escape that way – the conqueror of Hungary had taken refuge in a dust-bin. As he stood looking around him, half in the pantry and half in the dust-bin, his pursuers overtook him; and, as he stood in a stooping posture, had a good opportunity of thrashing him with their various weapons, one of which, a bean-stalk, about an inch and a quarter in thickness, was used with such hearty good will, that it was broken upon his back. He was then seized by half-a-dozen of his assailants, some of whom had hold of his coat, while others less tender of his person, grasped his long moustachios, and dragged him back along the passage towards the street: but watching his opportunity, he managed, with the help of two labouring men, who were ignorant of his name, to break away from his captors, and rush up-stairs. His newly-found champions closing the door at the bottom of the staircase, and mounting guard outside. The general and his two foreign friends who had accompanied him, tried to escape by a window in one of the bed-chambers, but not succeeding, were compelled to remain in “durance vile,” until the arrival of a strong detachment of police enabled them to leave the house with safety. The general’s outer man had been so damaged in the fray, that he was glad to accept the loan of a coat, and that from a pitying bystander. The two men who had so gallantly defended the “Saviour of the Austrian Empire” against his assailants, were magnificently remunerated; the one receiving 4s. 6d , and the other 2s. 10d. for his services. The landlord of the George, upon inquiry at Morley’s Hotel, Trafalgar Square, on Thursday morning, was told that the general “had gone back.” Several dismissals have, we are told, taken place in Barclay’s brewery, but the obnoxious name of Haynau, together with those of his two companions, have been carefully obliterated from the visiting book.

The attack quickly became an international incident between Britain and Austria, exciting a schism in government between the Prime Minister Palmerston and Queen Victoria, becoming a cause celebre in the newspapers, and initiating a bizarre debate on the morality of misogynistic violence as the defenders of Haynau accused the draymen of being wife-beaters and the press compared the flagelatory practices of Haynau with those of the Duke of Wellington.

There was an explosion of ephemera about the incident. Innumerable prints and satires were published, and at least 4 songs written to commemorate this mobbing, three of which can be found online: General Haynau, Haynau’s Retreat, The Southwark brewers and the Austrian butcher. There was even a ‘Commemorative Handkerchief’, printed with a scene of the ‘Escape of Marshal Haynau from Barclay and Perkins Brewery, London.’ It is upon this that the illustration on the plaque is based. 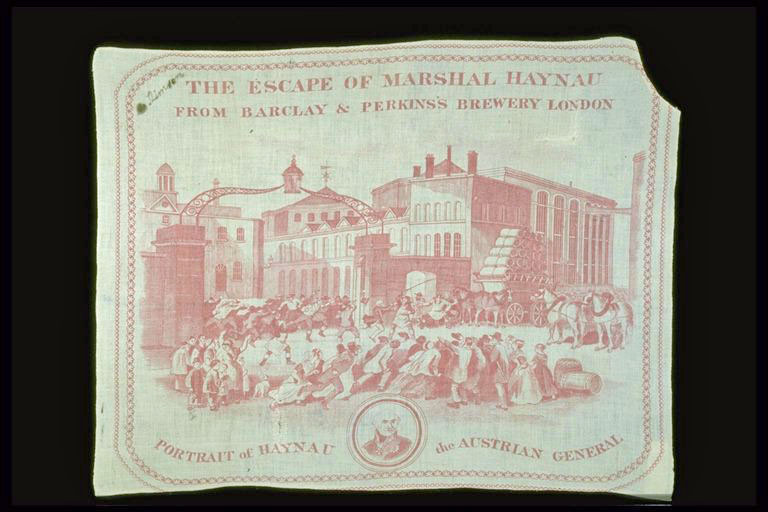 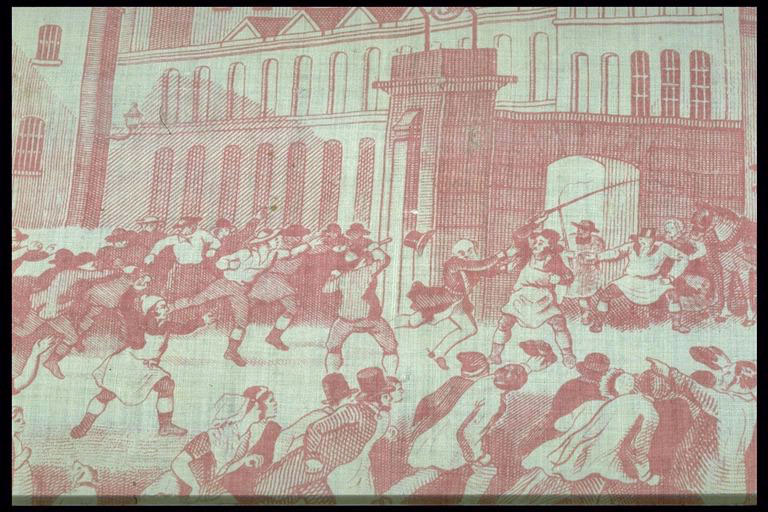 Haynau left London a few days later, but did not leave his troubles behind. The Evening Standard [paywall] of the 16th September 1850 reported:

The Zeitung fur Norddeutschland of the 11th inst., announces the arrival of General Haynau at Hanover, and the outbreak of some petty disturbances in consequence of a mob wishing to attack the hotel in which the marshal had taken his quarters. Several arrests took place, and it was found necessary to disperse the crowd by means of the civic guard.

This entry was posted in history, london and tagged london, radical history, southwark. Bookmark the permalink.